In addition to the classic tungsten technology, there is also beam generation using CeB6 filaments for tabletop and compact laboratory units. Almost all major SEM manufacturers use tungsten cathodes, which as a result are not only widespread, but also very mature. The filaments are inexpensive and can be exchanged by the user himself in a few simple steps. A tungsten device can be switched off completely when not in use and is still ready for use in a few minutes. For the occasional user, the running costs are thus greatly reduced.

CeB6 filaments offer longer life and higher beam intensity, which can be an advantage in low voltage imaging. However, the filaments are much more expensive and usually cannot be replaced by the user, which entails considerable maintenance costs. For immediate availability, CeB6 devices have to run permanently in stand-by even when they are not in use due to the higher demands on the vacuum level. 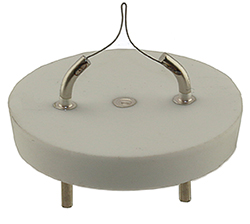 High voltages up to 30 kV

In order to excite the characteristic X-rays of an element, the 2 to 3-fold electron energy of the respective line is necessary. For example, an excitation voltage of 20-25 kV is needed to excite the Kα line of zinc at 8.6 keV. For the X-ray element analysis by means of EDX therefore the highest possible voltage is ideally a clear advantage up to 30 kV.

The majority of SEM compact devices are limited to a maximum accelerating voltage of 15 kV, forcing the user to confine themselves to the spectral peaks at energies less than 5 keV, where elements often overlap. Therefore, when selecting a suitable system, pay attention to the highest possible voltage in order to operate the EDX analysis optimally.

For sensitive samples, setting the accelerating voltage below 10 kV is an essential parameter because the sample is destroyed at high energies. Furthermore, fine structures can be outshone if the acceleration voltage is too high and thus become invisible.

When choosing a SEM device, pay attention to how flexible the high voltage can be set. Some tabletop devices offer adjustment in 1kV steps, others offer only preset levels for 5kV, 10kV and 15kV.

Topics of the guide